This is very good news! It appears the entire collection has been purchased by the Israeli National Library. Several years ago Sotheby’s was exhibiting and the family seeking to sell this incredibly important collection. It is particularly important for Targum scholars because it includes Valmadonna 1 (formerly Sassoon 282). UPDATE: That is NOT the case. Valmadonna 1 was purchased by the Museum of the Bible: Codex Valmadonna 1. The Sotheby’s catalogue described the manuscript as follows: 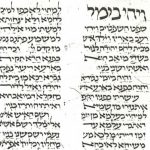 The jewel in the Valmadonna Library’s crown is one of the most important privately-owned books in the world – a Pentateuch (Hebrew Bible), written in England the summer of 1189. Known as the Codex Valmadonna I, this extraordinary book is the only dated Hebrew text in existence from medieval England, before King Edward I’s 1290 edict expelling the Jews.

It is a massive collection and many scholars were worried it would be separated and go into private collections. This should ensure access and enable new research going forward. The JC article shares a few more details about the collection and the owner, Jack Lunzer, who recently passed away.

The Valmadonna Trust Library, widely regarded as the finest private collection of Hebrew books and manuscripts in the world, was assembled by Jack Lunzer, who spent more than six decades assembling it.

The vast collection charts the spread of Hebrew printing around the world and includes 550 broadsheets and newspapers dating back as far as the 16th century.

Hailing the purchase, Oren Weinberg, director of the National Library of Israel said: “The Valmadonna Trust Library represents an historic addition to our leading collection of Jewish manuscripts, prints and books, which reflect and embody the cultures of the Jewish people around the world and across the ages.”

Mr Lunzer, who died last month at the age of 92, was born in Antwerp and made his fortune as a young man in the diamond industry in London. He named his collection after the town of Valmadonna in northern Italy, where he and his wife Ruth Zippel, had connections.  In 2015 Mr Lunzer sold his 16th century Babylonian Talmud, made by the Christian printer Daniel Bomberg, for US$9.3 million (£7.5 million).