Given the situation in Europe, it seems that the SBL conference in Salzburg will take place without restrictions and that we as IOTS can physically join it. We look forward to meeting you again after four years or longer.

The deadline of the Call for Papers, March 1st of this year, is approaching and we have received very interesting proposals. There is, however, room for more papers on Targums and Aramaic. Feel free to send in your proposal to e.van.staalduine-sulman@vu.nl.

We hope to see you all. Stay safe!

We had an excellent session at SBL and a nice surprise as well: Malcolm C. Doubles shared with us the history of Aramaic Studies in SBL. He has kindly shared his paper with me along with a picture of the earliest members of the group.

How It Began
by

The Society of Biblical Literature was organized in 1880 and has met annually ever since. Until 1967, these meetings were often hosted by Union Theological Seminary in New York. You may find it hard to believe, but for the first ninety-five years of its existence the Society sponsored no program segment devoted to matters of Aramaic origin. Such items were usually relegated to Old Testament program sections, or occasionally to a New Testament section. I begin this paper with thanks to Ed Cook for his willingness to allow me a few minutes to share with you my memories of how the Society was moved to initiate a discrete program segment devoted to rēbus aramaica. In this endeavor, I am especially indebted to Julia Foster who was involved in this effort from the beginning and who has shared much material and many memories with me. 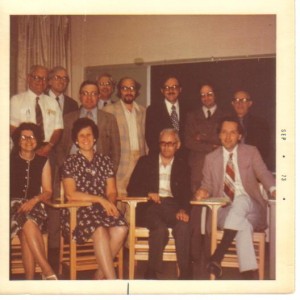 The story begins with the 1972 SBL Congress Meeting in Los Angeles and the person most responsible for our start, the late Bernard Grossfeld who sadly passed away this past July just a week or so before Julia was able to inform him about today’s planned presentation. Between sessions one evening in Los Angeles, Bernard approached Julia and me with the argument that we in Targum Studies needed an organization similar to that in Septuagint Studies. Furthermore, he noted that on the weekend of October 28–29, Gerard Kuiper was hosting a meeting in Atlanta with Julia and the late Shirley Lund to examine some Neofiti and Pseudo-Jonathan readings. Bernard insisted that if I would go down so would he and we could “crash” that meeting for a few hours. So that’s what we did.

END_OF_DOCUMENT_TOKEN_TO_BE_REPLACED

The preliminary Program Book for SBL 2013 in Baltimore is up. There will be quite a few papers in various sessions related to Aramaic and Aramaic studies. The AS Session has a strong line up:

After the papers have been delivered, there will be a brief presentation on the history of the Aramaic Studies section.

Binyamin Y. Goldstein, Yeshiva University
The Significance of Late Medieval Witnesses for the Textual Study of the Targumim (30 min)

The Altar to Sol: No Longer to Malakbel, a New Translation of the Palmyrene Inscription of PAT 0248 (30 min)

The Legal Traditions of Nabatean-Aramaic: Something New, Something Old, or Something Borrowed? (30 min)